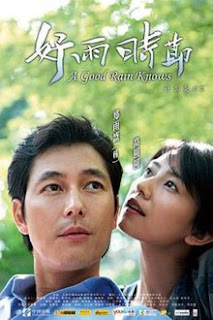 Originally intended as the second segment of Chengdu, I Love You,[10][11] the director and producers expanded its running time and released it as a stand-alone feature.[12][13][14][15]

Timely like the spring rain, so has he come back into my life ... . Dong-ha is a thirty-something Korean architect on a business trip to Chengdu, China where his company is carrying out construction projects to rebuild the city after the earthquake of 2008. By chance, he meets May, an old friend from his school days in the U.S. May is originally from Chengdu, where she had returned to after graduation; she works as a tour guide. Dong-ha and May had feelings for each other then, but they parted before they had a chance to define or declare them. Now that they are thrown together again, they find that these old feelings reignite and new ones form.[16][17][18][19][20]