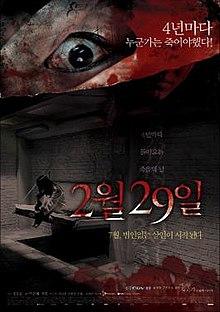 February 29 (Korean: 2월 29일; RR: Iwol isibguil) is a 2006 South Korean film and the first installment of the 4 Horror Tales film series.[1] It was followed by Forbidden Floor, Roommates and Dark Forest.

In this tale Ji-yeon is a tollgate ticket girl who is frightened by the driver of a mysterious black car when he hands her a bloodstained ticket at midnight. Her fear deepens after her colleague, Jong-sook, tells her that 12 years earlier a prisoner transport vehicle caused a traffic accident wherein all the prisoners involved died - and some of the corpses disappeared. Since then, a murder has occurred near the tollgate on February 29th, every four years. Calamity soon follows.