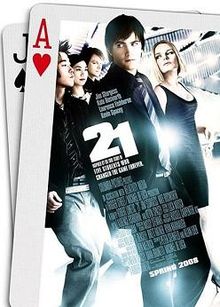 21 is a 2008 American heist drama film directed by Robert Luketic and starring Jim Sturgess, Kevin Spacey, Laurence Fishburne, Kate Bosworth, Liza Lapira, Jacob Pitts, Aaron Yoo, and Kieu Chinh. The film is inspired by the true story of the MIT Blackjack Team as told in Bringing Down the House, the best-selling book by Ben Mezrich. Despite its largely mixed reviews and controversy over the film's casting choices, 21 was a box office success, and was the number one film in the United States and Canada during its first and second weekends of release.