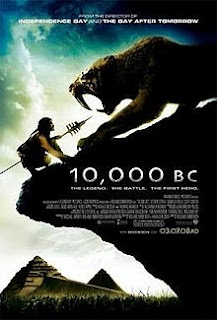 10,000 BC is a 2008 American epic action-adventure film directed by Roland Emmerich, starring Steven Strait and Camilla Belle. The film is set in the prehistoric era and depicts the journeys of a prehistoric tribe of mammoth hunters. The world premiere was held on February 10, 2008 at Sony Center on Potsdamer Platz in Berlin.[1][2]

The film was a box office hit, but consistently regarded by professional critics as Emmerich's worst film, as well as one of the worst films of the year.[3]