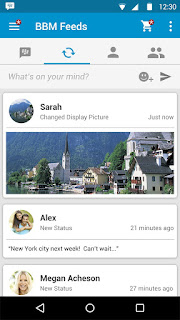 BlackBerry Messenger, the popular BlackBerry-owned messaging service, has started rolling out a new 'PayPal integration' feature for Android users in the form of an app update. The feature aims to let users quickly sending money to BBM contacts as an attachment. Thanks to its just released version 2.10.0.31 update that also has some under-the-hood performance improvements.

BlackBerry has provided a quick change log of the Android update:
• Bug fixes and performance improvements
• Official BBM Sticker Club subscription in the BBM Shop
• PayPal integration for sending money to BBM contacts as an attachment
• Customizable font size within BBM conversations with pinch-to-zoom
• Enhancements to BBM Voice connectivity
• View, like, and comment on group pictures and other events from within BBM feeds.

The update is now available to grab on the Google Play Store. As always, you can download the latest BBM apk file from the source link given below.